Why are we so drawn to Rembrandt? He is one of the few old masters who you could be confident the non-art fan might recognise. Like today’s superstar politicians, Boris or Obama, he needs no name other than Rembrandt. I can’t but feel that it has something to do with his universality. There is something in him which we can all like. The confidence of youth as he makes his way in the world. The good time Rembrandt, out enjoying himself with his beautiful young wife in the Prodigal Son in a Brothel, or the old Rembrandt, slightly saggy and down on his luck, yet radiating a quiet dignity. Every stage of life is there for us to see. What we see more often than not is ourselves. In recent years we have had the blockbuster exhibition Rembrandt: the Late Works at the National Gallery. Even for someone like me who visits a lot of galleries it will remain for a long time etched in the mind’s eye. It will really take something special to see this relegated from my all-time top 5 exhibitions. Yes, I am equally that sad and retentive. But it’s a useful yardstick by which to judge.

There are so many great Rembrandt canvases but for me it is his self-portraits that display his talents in a unique way – just look at the self-portrait with echoes of Giotto in the circles displayed behind him – in the version at Kenwood House below. In my collection of catalogues I have a copy of Rembrandt by Himself from the 1999 exhibition of the same name at the National Gallery. What’s striking, as you see more than 40 of his portraits, is the regularity with which he painted himself – something which was unprecedented at the time. It is as though you can see him age before your very eyes. If you can’t see the catalogue then the wiki page gives you a similar experience.

That’s why I’ve started visiting a number of galleries just to see Rembrandt self-portraits. This past weekend I finally made it to Glasgow to see the Burrell Collection before it closes for a major refurbishment. There are a few nice things but if I’m honest it was all about Rembrandt.

My wife has pretty much been dragged around the UK with me but we have so many great Rembrandts and not always in the places you would expect; Liverpool’s Walker Gallery, Kenwood House and Buckland Abbey in Devon. Then there are the more obvious sources like the National Galleries in Edinburgh and London, plus the Royal Collection.

We have 7 of the some 45 or so works in the UK. My wife and I have so far seen the vast majority – only Stockholm, Pasadena, Karlsruhe, Indiana and Aix-en-Provance are holding out as far as not having definite plans to go visit. Stuttgart is on the list for the coming weekend with its rather controversial self-portrait which played such a large part in the development of modern dating techniques.

It is almost impossible to look at Rembrandt’s self-portraits without seeing them as ongoing a dialogue with himself conducted with a heart-breaking humanity and candour. So we will keep on being drawn to them…

Just in case you wondered my top five all time favourite exhibitions are: 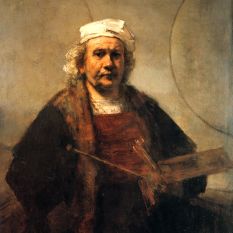