The very concept of what constitutes culture arouses a fair bit of discussion even in my office, not least as one of my colleagues originally hails from Hull. On 1st January 2017 the city will take up its place as the UKs City of Culture. I could just about cope with understanding the concept behind Liverpool as the European Capital of Culture in 2008. But I just don’t see Hull as cultural. Perhaps it’s simply because I grew up not a million miles away.

The UK isn’t alone in having its own city of Culture and I was recently fortunate enough to spend a day in the beautiful northern Italian town of Mantua.Within easy reach of Verona airport it’s a great place to spend a weekend. I’ll certainly be going back and don’t think Alessandra will take any convincing. You can find out more by following the link to a great English language website.

The comparison isn’t exactly flattering to Hull. You need not drive into Mantua across the causeway pictured above to know it’s not exactly the M62 you just know that before you’ve even picked up your overnight bag. Mantua is a UNESCO world Heritage site. Hull has its cream Telephone boxes. Mantua has a historic association with the development of opera. Hull the New Truck theatre.

An Italian association with culture is just hard wired into our subconscious. I can readily accept the Tuscan town of Pistoia which takes up the Italian crown in 2017 even though I’ve never been. Fairly or unfairly we need to accept that it’s cities like Mantua against which Hull and others will be judged. Does that make me a cultural snob? Possibly.

But I don’t accept that things simply have to be old to be cultural. David Hockney’s iPad paintings are part of a cultural arch which is joined with Da Vinci and his silverpoint. Modern films, posters, books and plays all can have cultural significance. But what separates cultural from mere entertainment ephemera is a quality which in itself is timeless. Victorian page turners haven’t come down to us on mass but Dickens endures because of a timeless quality. Austin isn’t all petticoats but people – thus it will endure.

There are two things which will stand out for a long time in my memory from this trip. Both have been mentally filed for a further post on great frescos.

In the Hall of Giants, Giulio Romano, a onetime pupil of Raphael takes Mannerism to a new level and conjours a great dome from little more than plaster and some coloured paint. The room itself is modest in size the effect is enormous. There is just such dynamism within the fresco that the walls no longer appear flat but are both architecturally solid and epic in scale. If you do get chance do visit Palazzo Te for this room along it is well worth it. 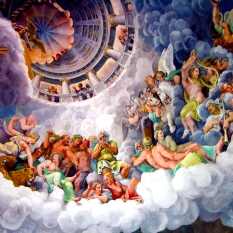 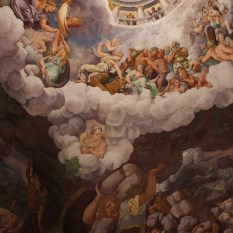 Camera degli Sposi is reputed to be the bedroom of Ludovico Gonzaga and his wife who are prominent in the painting by Andrea Mantegna. Though it took nine years from 1465 to 1474 (both dates are incorporated) the fresco bring the outdoors inside in something akin to a loggia. Rightly it’s viewed as a masterpiece. The notional theme is the election of Francesco Gonzaga as a cardinal and is therefore a dynastic political statement but it’s also much more besides as is so beautifully evident in the many cherubs and the allegorically message with in the dome. Do take a look at the photos which do it more justice then anything I can put into words. 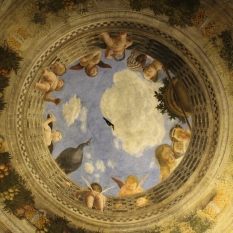 I can be certain that the frescoes I saw in Mantua will still be culturally relevant in 300 years’ time because they already have achieved that. They have lasted for one reason alone they are of fantastic quality. Quality is distinctive precisely because it’s rare. It doesn’t make Hull a bad place but it doesn’t make it cultural any more than Hartlepool, Huntington or Harwich.