Vienna is a beautiful city with attractive architectural delights and an array of fantastic coffee houses such as Demel or Hotel Sacher. There is so much to see and do that invariably you need a guide to help you plan beforehand. We have found the Lonely Planet Guides as good as any and have a shelf full of them at home.

But they really don’t cover everything. Just next to the Hofburg you will find the Augustinian church – it’s free to get in and its location so close to the Museum Quarter means you are almost certainly going to pass by it at least once or twice. Just spare ten minutes to pop in, sit down in a pew and admire one of the Italian sculptor Canova’s masterpieces.

Canova was the neoclassical superstar of his day – he even held the post of ‘Inspector-General of Antiquities and Fine Art of the Papal State’, a position formerly held by Raphael. I’ve long been a fan and have even been to his little home town and the museum in his former workshop in Possagno near Asolo.

In 1797, he went to Vienna but only stayed for a year. Whilst there, he got the commission for the Monument to Maria Christina of Saxony-Teschen in the Augustinerkirche. Little known today she was an older sister of Marie Antoinette. 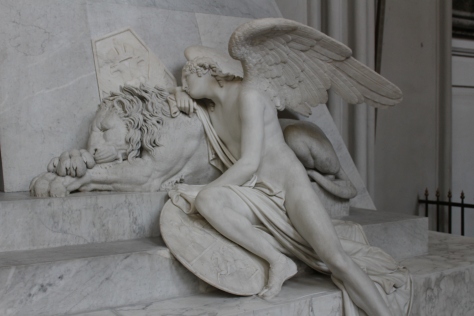 The design of the tomb is interesting at a number of levels. He already had plans drawn up for a similar monument in Venice to Titian but was unable to execute them as the city had been occupied by the French under Napoleon. Eventually the Venetians would honour Canova as one of their own with a monument of a similar design in the magnificent Frari church.

As a tomb what’s striking about it is its lack of any overt religious iconography. For the devoutly Catholic Habsburgs that’s a touch unusual. Canova only really got away with it because what he produced was so simple and above all beautiful.

The classical allusions aren’t so evident to us now, but its shape is based on the Pyramid of Cestius in Rome.  The image of the deceased only appears in the small relief at the top. It’s the subject of death itself which take centre stage.

The mourning lion and comforting angle are accompanied by a cortege of people of different ages and genders which approaches an open doorway. You almost want to join their graceful throng and get the chance to pass through the opening. It’s inviting and yet foreboding with the black void contrasting starkly against the white Carrara marble. It draws in and holds our thoughts about what lies beyond the gateway in the void beyond.

It might not be in the guide but don’t miss it. 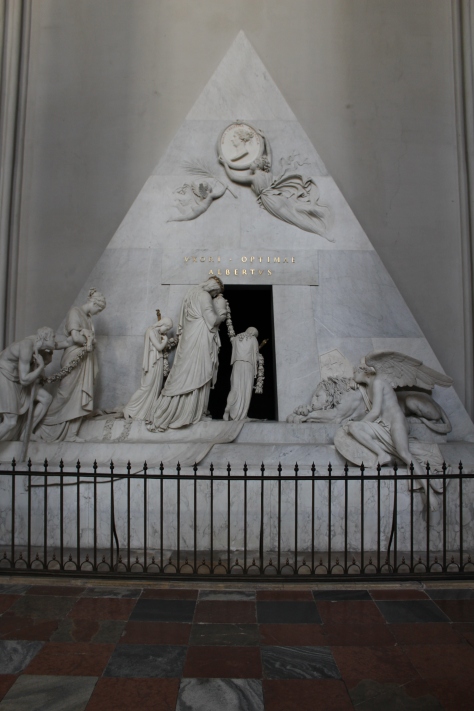