Visiting Milan has become a family tradition over the last couple of years as my wife Alessandra and I make the most of being in Italy over the Christmas Break.

One Milanese tradition I wish London Mayor Sadiq Khan would import is to be found at Palazzo Marino. It’s the seat of government very much like our own City Hall though with a more familiar grand palazzo feel.

Each year they get one artistic masterpiece and put it on display. It’s free to go and see and it’s used as an opportunity to provide the art loving public with the chance to see something they wouldn’t otherwise. The cities tourist board and other outlets use it as a focal point and make the most of the cities arts and cultural heritage drawing attention to the year ahead. You don’t need a ticket and you can’t pre book. You simply join the queue alongside the shivering Milanese and wait your turn. Normally it’s only 15-20 minutes even when it’s busy.

What makes the scheme such a success is that the works are truly masterpieces by world renowned artists. In recent years they have had some paintings including Raphael’s Esterhazy Madonna (from Budapest); the Madonna della Misericordia by Piero della Francesca (which I saw last Christmas); St John the Baptist by Leonardo Da Vinci (lent by the Louvre); Raphael’s The Madonna of Foligno (leant by the Vatican). 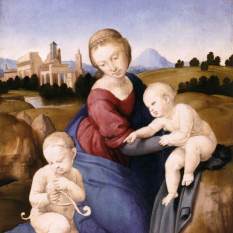 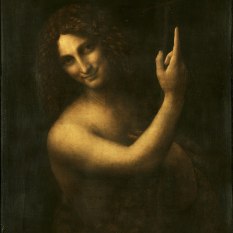 Crucially these aren’t paintings you would see by simply going to another venue in the city. They are so much more than that. This year they have the Sacra Coversazione of 1520 by Titian from Ancona pictured above with a couple of other shorts below, including an intriguing glimpse at the back complete with some drawings of the Christ child. 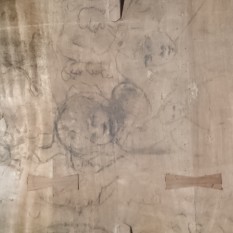 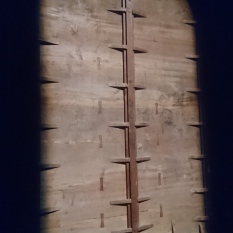 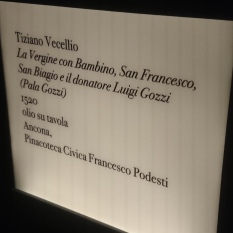 When you entre in batches of 15-20, a guide gives you a short 5 minute talk (in Italian) about the art work and some of the costs are defrayed by advertising and the sale of a monograph and other material on the work. It’s only on for a few short weeks and so need not provide a disturbance to the everyday work at City Hall and more information can be found on the Milan City website (in English).

London I’m sure could easily replicate the feast. City Hall would be a good venue with many tourists going to see Tower Bridge close by and the location within easy reach of locals from London Bridge. Mayor Sadiq Khan could do a lot worse than to start by asking the Queen for the loan of one of her own masterpieces. Perhaps her Vermeer The Music Lesson has sufficient gravitas and will provide a draw for Christmas 2018; until other prestigious international loans can be set up for subsequent years. Other major UK private collectors may also be approached (there are a couple of Caravaggio’s I’d really like to see!).

Will it happen? Well, I’ll be contacting both the Mayor and my local London Assembly Member to see if they are prepared to give it a go. The recent popularity of the Da Vinci Salvator Mundi which went on display at Christies for only a few day and proved tremendously popular, I think, shows that with the right works then there certainly is the interested.