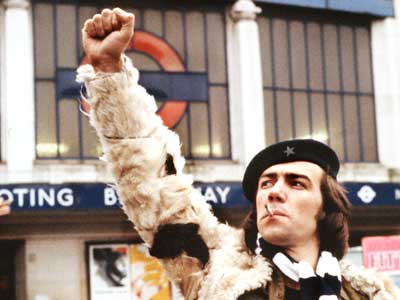 It would be an iconic sight to see Tooting, home of Citizen Smith, captured by the Conservative party. Corbyn supporters would find it very difficult to explain how a message which didn’t work in Tooting had any chance of being successful in the dozens of marginals he needs to win outside London – in areas like the Midlands. Young, metropolitan and diverse, this ought to be a seat Labour can hold.

The Merton & Wandsworth GLA constituency seat won for the first time by Labour’s Leonie Cooper strengthens that argument. Even in the dark days of William Hague (2000) and Iain Duncan Smith (2004); the Conservatives held this seat comfortably with solid majorities of 12,870 and 16,878. A majority of 4301 for Labour must be accompanied with a substantial win for Labour in Tooting though we won’t get the ward level data for some time. It does however seriously call into question the relative strengths of the local parties’ ground operations. It would be a mistake to simply pin this on a poor Zac campaign and forget how weak the Steve Norris set up was. If it could be held in the early naughtiest then the recent loss is nothing short of a disaster.

Turnout will be critical. The Labour whips need to lay a writ in Parliament to ensure that the bi-election is on the same day as the Euro referendum. London is more pro EU than most areas and that is especially true of the demographic in a seat like Tooting. The higher turnout this will generate is their single best hope for which the local London election result is yet more evidence. Anything else risks an almighty and embarrassing defeat.

Forgive the history lesson but it’s important to understand why the Conservatives think they are in with a chance. Like many parts of London, the area is changing rapidly. Local Tories feel this ‘gentrification’ will eventually bring them success. Each impressive new eatery, basement escalation or loft extension validates their world view. Yet, it’s not one I share. Victory is far from inevitable for either side.

Simply put: Tooting isn’t nearby Battersea. Ten years ago it represented something of a high watermark for the local Conservatives. They even captured two of the three council seats in the Tooting ward that Mr Khan, himself a local Councillor, used to represent. They had 15 of the 21 Councillors and representation in an impressive 6 out of 7 wards.

Tooting is much more than the area around the tube station – taking in the area around Wandsworth Common, Earlsfield and much of the southern bit of Balham. These areas stayed loyal to the famously Conservative Council even if Sadiq was able to hold them off on the same day’s general election. Local Conservatives knew the game was up when the Earlsfield ward box counts didn’t have Mark Clarke ahead. It should have been a banker. The clear divide between the solid Labour areas bordering Mitcham to the south and the more affluent leafier north emerged as the Conservatives slipped back to having 12 Councillors in 4 of 7 wards.

Fast forward another 4 years to 2014 and the Conservatives seem much more vulnerable. Labour locally are now the dominant force in the constituency with representation in 5 in 7 wards and a total of 12 out of 21 Councillors.

A similar picture emerges by taking an average of votes in these multi member wards, to negate the split nature of some of the wards over the period – see graph below. 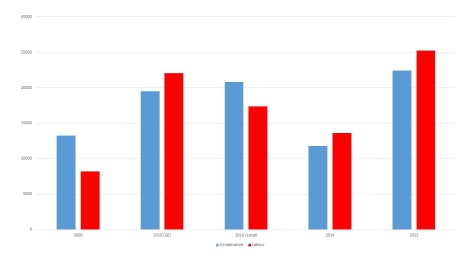 The distraction of the EU vote and the success of the Labour campaign in Oldham means this isn’t likely to be won on anything other than a very local platform. Wandsworth Council will find itself under focus in a very big way for the first time since the 1990s.

I lived in Tooting for 7 years – it’s a great place but not without its faults. There is no shortage of potholes, cracked pavements and the like which can be contrasted all to readily with a council chief executive, who, however good, is earning way in excess of the PM. The Council has lost the innovative vigour of its radical youth. ‘No. 1 for service and value’ used to be the strap line but it is pretty hard to justify against its significant failure with Ofsted lambasting both members and elected officials in a recent report into its children services department. Many of my former Council colleagues understandably find this hard. Already lean the cuts have hurt Wandsworth more than most. The planned merger with Richmond may well make sense but it’s unlikely to motivate its supporters and can be spun as bad news by its opponents. Crossrail 2, low tax and the sheer ability to do things with a Council you run mean that the local Conservatives are not without their own positive messages to tell.

We don’t yet know who will be standing in the red corner. There are a number of effective local figures and I shan’t harm anyone’s chances by naming them. But we do know who will be donning the blue gloves. Dan Watkins fought the seat in 2015 but didn’t get the same level of support as 5 years earlier. He may have polled more votes than Mark Clarke but that can easily be explained by the near total collapse of the Lib Dems. Sadiqs majority nevertheless rose by 318 or 0.3% votes from 2524 to 2842.

I don’t really know Dan but by all accounts he’s very decent, hard working and typifies many of the urban professionals living in the area. Through initiatives like the ‘Love your local’ awards he’s raised his profile and will be able to count on a degree of name recognition.

There is no doubt in my mind that the local Conservatives will be up for a fight. They will start with an impressive pledge base which could be as high as circa 20,000 as was the case in 2010. But as I recall in the final weeks of 2010 the campaign didn’t add to the number of Conservative supporters as we simply found many of them were incorrect. Enthusiasm got the better of many of us; but 2010 was a far better vintage for the Conservative campaign in the capital than 2015.

Local Tories have tended to grudgingly respect the way Sadiq has bested them. He’s been an assiduously smart local operator. With him out of the way they will feel it’s a different matter. What this finely balanced contest will ultimately come down to is turnout.